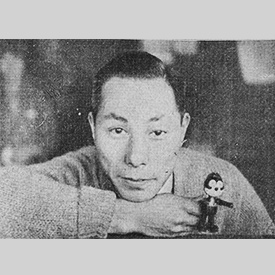 Ogino created films as an independent artist instead of becoming an occupational filmmaker, and led Japan's small gauge and amateur film communities while winning a number of awards both domestically and internationally. Since 1928 when he won his first award with Lake Towada (十和田湖) shot on Pathé Baby, Ogino produced over 400 works until 1984 using 9.5mm, 16mm and 8mm film. In addition to documentaries and travelogues, many of his works prominently featured experimental animation using stop motion. At the international competition St. Teccian Cup held in Budapest, Propagate (開花, 1935) and An Expression (表現, 1935) won first place and Rhythm (リズム, 1934) won second place. In his work, An Expression, Ogino strived to produce natural color. He applied a method in which black-and-white film frames, alternately shot with red and green filters, were painted alternately in red and green. Multi-colored images would appear when the film was run twice as fast as usual. While producing films, Ogino also wrote a number of articles for magazines for amateur film enthusiasts such as Pathé-Cine (パテーシネ) and Kogata Eiga (小型映画). After WW2, he also held Ogino 8mm Film Courses and contributed to nurturing artists of the next generation.