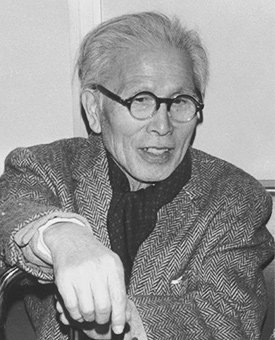 Although his given name was Zenjiro Toda, he later took his wife's surname and became Zenjiro Yamamoto. Sanae was his pseudonym. He was sent to become an apprentice to continue his family's merchant business, however, unable to give up his dream of becoming an artist, Yamamoto ran away from home time and again. After studying at Kawabata Art School and the Yokohama branch of the Tatsumi Art Association, he was scouted in 1917 by Seitaro Kitayama, who was an instructor, and began producing animations. Yamamoto joined Kitayama Manga Seisakusho, established by Kitayama after he left Nikkatsu Mukojima Studio in 1921. There, Yamamoto took part in drawing and directing The Hare and the Tortoise (1924). In 1925, he established Yamamoto Mangaeiga Seisakusho, and from Ubasuteyama (姥捨山, 1925), most of his works were commissions from government offices. Soon after WW2, Yamamoto gathered over 100 people involved in animation production throughout the Kanto region and established Shin Nihon Dogasha. The company then changed its name to Nihon Mangaeiga Corp. and produced Kenzo Masaoka's Sakura (桜, 1946), though the film was never released. The next year, Yamamoto and Masaoka left the company together and established Nihon Doga Corp. (which eventually acquired Toho Zukai Eiga and changed its name to Nichido). Nichido eventually became a subsidiary of Toei, and started anew as Toei Doga (currently Toei Animation) in August 1956. Even after Yamamoto left Toei Doga in 1964 and established Yamamoto Animation Kenkyusho (later Children's Corner), he produced works for Toei Doga as a subcontractor and continued to nurture the next generation of artists in the animation industry.